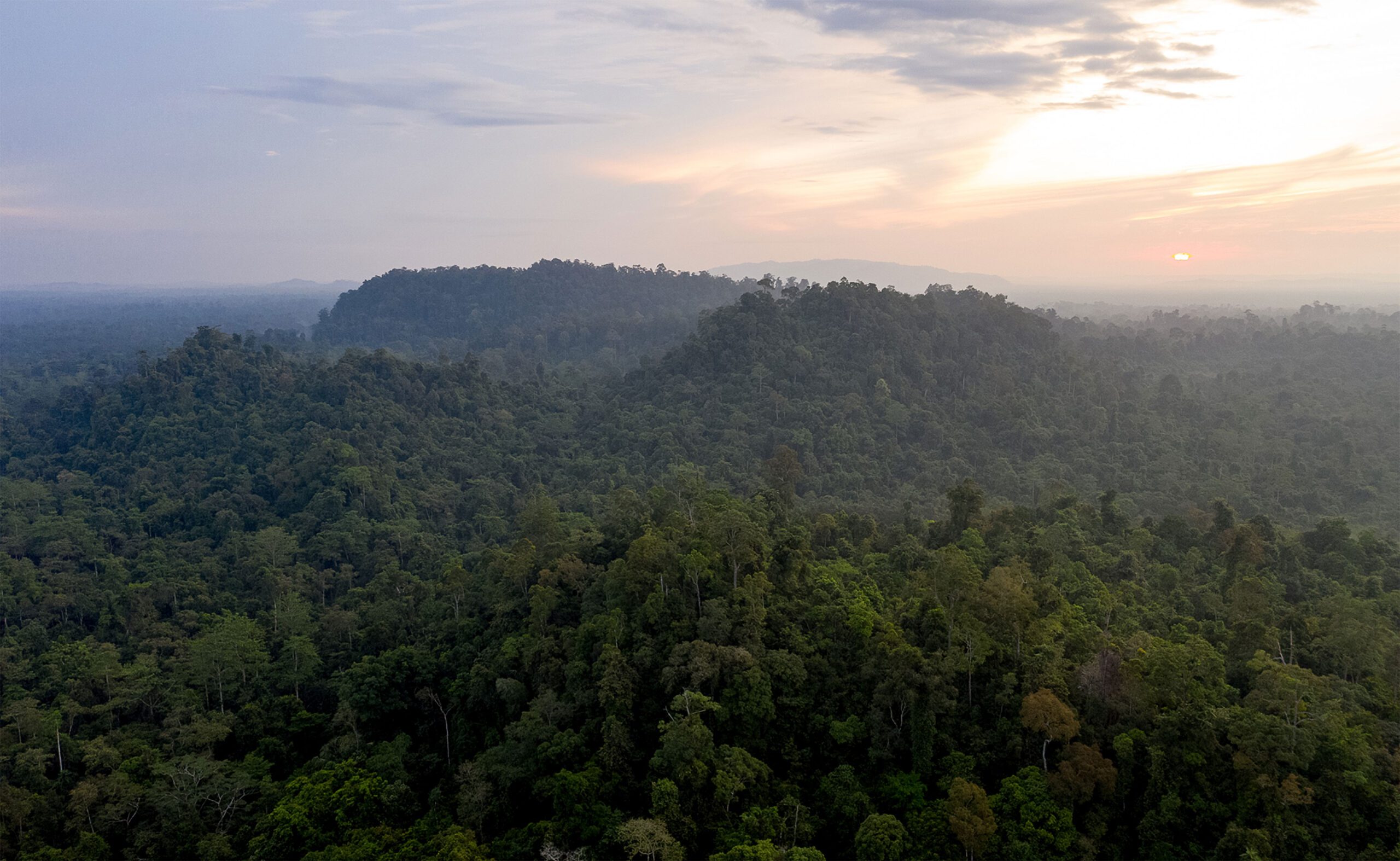 connection
Together for wildlife and people.

Since 2008, the Oregon Zoo and Oregon Zoo Foundation have supported community-based organizations working to conserve threatened species, restore habitat, reduce human-wildlife conflict and promote coexistence in the Malaysian state of Sabah. Foundation donors have given generously to support this work, helping to sustain important long-term partnerships.

Much of Sabah — which covers the northern portion of the island of Borneo — has been logged and converted to oil palm plantations. Malaysia produces more than 40% of the world’s palm oil, a key ingredient in many cosmetics, cleaners and packaged foods. Habitat loss, fragmentation and degradation threaten the survival of many native species, including Bornean orangutans and elephants 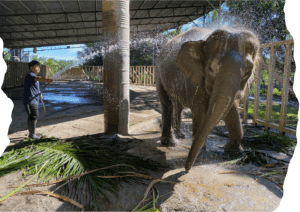 Replanting forests helps create a better future for all.

Nestled on the banks of the Kinabatangan River, Sukau is a remote enclave with one restaurant, a few shops and lodges for tourists eager to see the region’s amazing wildlife. On Aug. 24, women from the Hutan Reforestation Unit gather their tools and head out of the village by boat.

Today, the reforestation unit is planting trees. The team moves through the site, digging holes with a spade, planting saplings grown at a nursery in the village, and tagging them.

They also maintain previously planted areas, cutting grass with a machete and pulling weeds by hand to prevent them from overtaking the tiny saplings. Each site is monitored for five years to make sure the trees are established.

The goal is to create forest corridors, allowing orangutans, elephants and other wildlife to move freely along the riverbanks while bypassing the palm plantations.

Dr. Sharon Glaeser, a conservation scientist at the Oregon Zoo, is in Borneo on a seven-week trip to support our partners in the region and help improve the welfare of elephants in the care of Sabah Wildlife Department.

She has visited five times since 2015, spending time with the reforestation unit and even planting some trees herself. Seeing the forest change over time, she says, sparks hope.

An aerial view of the region shows a landscape dotted with rows of identical palm trees, their tops resembling giant green pinwheels. Thirteen years ago, the spaces between these orderly plantations were barren. Today, more than 50 tree species grow there, most of them fruit-bearing to provide food for wildlife. The Hutan team plants about 30,000 saplings a year, about 80% of which reach maturity. Since the organization’s founding, the women have planted more than 200,000 trees that still stand today.

Wildlife surveys have documented nearly 150 species — including hornbills, orangutans and flying lemurs — taking advantage of the abundant resources in these restored habitats.

“People can do amazing things,” Glaeser says. “We are seeing a landscape emerge that allows movement and provides safe harbor for wildlife.” 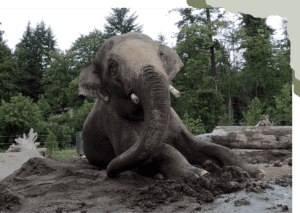 Samudra in his mud wallow at the Oregon Zoo.

Hutan considers human well-being and wildlife conservation as interdependent. Community-led habitat restoration helps secure the long-term survival of endangered species while members of the local community are earning income supporting conservation activities — the goal is to help humans and wildlife.

“People are thriving because they have jobs, and young people are getting opportunities to become leaders through certificate programs, training and education,” Glaeser says.

“They can live in the village where they grew up, where their ancestors lived.” 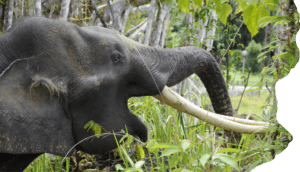 Gambaron after a good swim at Borneo Elephant Sanctuary. At age 30, Gambaron, the only resident adult bull, plays an important role in the social development of the young male elephants living at the sanctuary.

Knowledge exchange for the well-being of elephants.

On Aug. 24, Glaeser and Jason Miles, a member of the zoo’s elephant care team, are at the Borneo Elephant Sanctuary, about 18 miles from where the Hutan team is working along the Kinabatangan River.

It was no small feat to get here. Surrounded by plantations on all sides, it is hot, humid and green as far as the eye can see. A pied hornbill flies from a lamppost to a tree. Macaques, butterflies and monitor lizards are everywhere. In the center of the yard, a large tropical oak — a Quercus argentata — with giant offshoots creates pillars in the pond where on most days the elephants swim.

Five elephants live here on 3,000 acres — one female, Limba, and four males, Adun, Budak, Danum and Gaboron. In total, there are 23 elephants in three facilities managed by the Sabah Wildlife Department.

Assuring the well-being of these orphaned elephants is an area where the zoo is well-positioned to help. Foundation donors have funded the salaries for full-time caregivers in Sabah, and they have supported sending zoo staff to the region to share training and husbandry expertise — gained from more than 60 years of caring for elephants at the Oregon Zoo — with the wildlife team in Borneo.

At the Oregon Zoo, caregivers train animals with positive reinforcement, using a clicker or whistle to mark a desired behavior and reinforcing the behavior with a reward. Delivering the mark and treat at the right time is important because you don’t want to reinforce the wrong behavior. “Timing is everything,” Miles explains. “If your timing is off, there can be confusion between the trainer and the elephant.”

Miles began his zoo career caring for big cats, but when he started working with elephants, he was smitten. “I still love lions and tigers, but once I got around elephants, it was totally different,” he says. “You can just look at them and they’re thinking — they’re deciding. 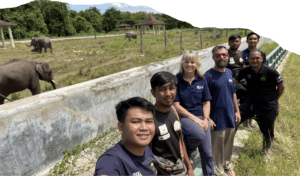 Some members of the Borneo Elephant Sanctuary care team with Sharon Glaeser and Jason Miles (3rd and 4th from left). Sanctuary staff are a close-knit group — working and living together makes much of daily life communal. After meal prep and dinner, evenings are spent talking with their families, playing games and laughing with each other.

A magical day at the elephant sanctuary.

For Glaeser and Miles, this day is a magical one. They have spent more than a week with sanctuary staff members. Initially, Miles was concerned that the people and elephants might not understand him, but things are starting to fall into place.

“My goal was to teach the staff our style of training,” Miles says. “I was excited, but also worried that I would get here and nothing would work. Then I had this light-bulb moment: Think of the routine as a dance. This is step one, this is what step two looks like, then we go to step three.…”

The dance lessons proved a success. By day four, both elephants and staff were understanding the Oregon Zoo’s elephant routine, and today — day nine — things are starting to click.

Everyone gets in on the encouragement, saying “good boy” at the perfect time and cheering each other on as staff and elephants learn together. The afternoon is filled with laughter and teasing as staff develop the skills they set out to learn.

Miles also talks with the team about how to spot symptoms of EEHV, a rapidly progressing and often fatal disease to which young elephants are particularly susceptible.

The disease affects all Asian elephants — whether wild or in human care — and unfortunately, Sabah has lost elephants to it in recent years. The Oregon Zoo provided emergency medication for the Borneo team in 2020, and is now helping them build capacity for monitoring, diagnostics and treatment.

“It really makes me feel good that I am able to benefit the elephant community globally,” Miles adds. “I’ve left my own little fingerprint over here, which I’m super proud of.” 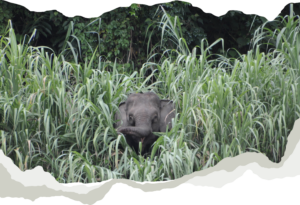 Wild Bornean elephant calf along the bank of the Kinabatangan River. The calf was spotted traveling along a restored forest corridor with a large herd.

A blessing for the trees.

In the weeks before visiting the elephant sanctuary, Glaeser was teaching a university course in community-based conservation, and returned to the forest with the Hutan team to learn the art of seedling maintenance and to plant trees in a new wildlife corridor — it was a moving experience for all.

For Glaeser, planting the trees was a small action with a big impact. “It’s not just a beautiful place,” Glaeser says. “Seeing this community working together is so inspiring and hopeful. Planting a tree that is providing a safe place for wildlife makes me feel like a little bit of my heart, a little bit of myself, is in Borneo.”

Since the location of every plot is recorded, her son could visit one day, see the tree his mom planted, and witness the rejuvenation of the forest and the wildlife it supports.

Rainforest in Sabah, a Malaysian state occupying the northern part of the island of Borneo.